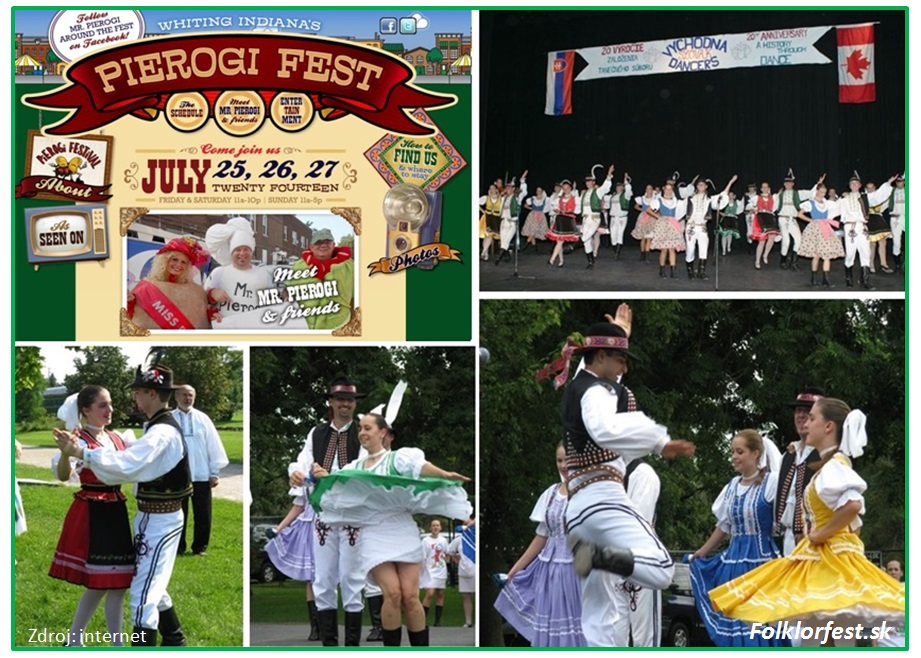 THE WHITING PIEROGI FEST is presented by the Whiting Robertsdale Chamber of Commerce. Drawing almost 200,000 visitors each year, the Festival is the pride of Whiting. It allows us to celebrate our heritage while poking a little fun at ourselves at the same time. Where else can you see grown women dressed up like our grandmothers (bushas, as we say) in housecoats and babushkas? Or the lawnmower brigade strut through town with sandals and socks on like or dads did? You'll also see life-size polish pastries and goodies walking and talking waiting to take a picture with you? Only here at Whiting's Pierogi Fest. Welcome!

History
The Vychodna Slovak Dancers originated in 1984 from a group of parish children at the Nativity of the Mother of God Slovak-Byzantine Rite Catholic Church in Toronto, Ontario. As children, we were accustomed to performing plays, poetry and songs for the parishioners, but dancing was something new that we were eager to try.

During our first few years, we performed primarily at church functions and local Slovak community events. As word began to spread about our talents, we were invited to perform at many different festivals and celebrations in Canada such as the International Youth Festival in Beauport, Quebec in 1987. Over the next several years, we brought choreographers to Canada from Slovakia to help us expand our repertoire.
History

In 1990, we traveled to Slovakia for the first time to show Slovakians how their folklore was thriving in Canada and performed at the popular Vychodna and Detva folklore festivals. We ended our trip with a new appreciation for Slovak folklore and new life-long friendships with various Slovak folk groups. Since this inaugural trip, Vychodna has returned to Slovakia several times to perform and intend to visit the country every few years.

In 2009, we celebrated our 25th Anniversary with a theatre production, “Generation to Generation" which recognized the generations of Canadian Slovak Folklore.