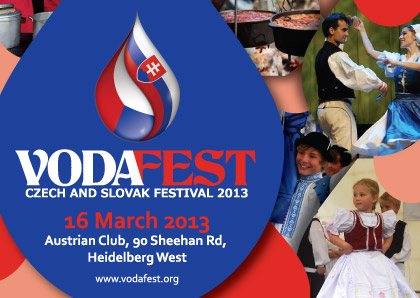 On 16 March 2013, the third make of the Czech and Slovak festival will take place. This time it will be at the Austrian Club Melbourne in Heidelberg West.

With a scenery and set up similar to Sumava Peksa Park, it is closer to the city and easier accessible, too.

We believe this will make it possible to introduce our communities and cultures to the broader Australian public.

I believe that you are looking forward to the next Vodafest which is fast approaching.

Vodafest 2013 will be held on 16 March 2013. The third make of the festival will be held during the Victoria’s Cultural Diversity Week. This week full of celebrations is an opportunity for all communities living in Melbourne share their cultures, religion and language and to celebrate the benefits multicultural society brings to Victoria.

Multicultural events, festivals, concerts and fundraising dinners will be held at various locations in Melbourne during this week. We are glad that Vodafest - Czech and Slovak festival will be one of them.

We believe that new venue will attract new visitors and allow us to share our culture with broader Australian public. Austrian club has family friendly outdoor and indoor facilities similar to Sumava Peksa Park. You can enjoy sunshine at the lovely picnic meadow or hide in the shade of trees.

Despite Vodafest changing the site the Sumava Peksa Park will not be forgotten. Profit from this year's festival will go towards the construction of a children’s playground at Šumava. The playground is currently in the planning stage and its construction will commence at the beginning of 2013. Vodafest believes that the playground will make Sumava more family friendly and kid’s safe place.

So save the date in your diary and come along to Vodafest 2013 to enjoy this special day full of Czech and Slovak culture.