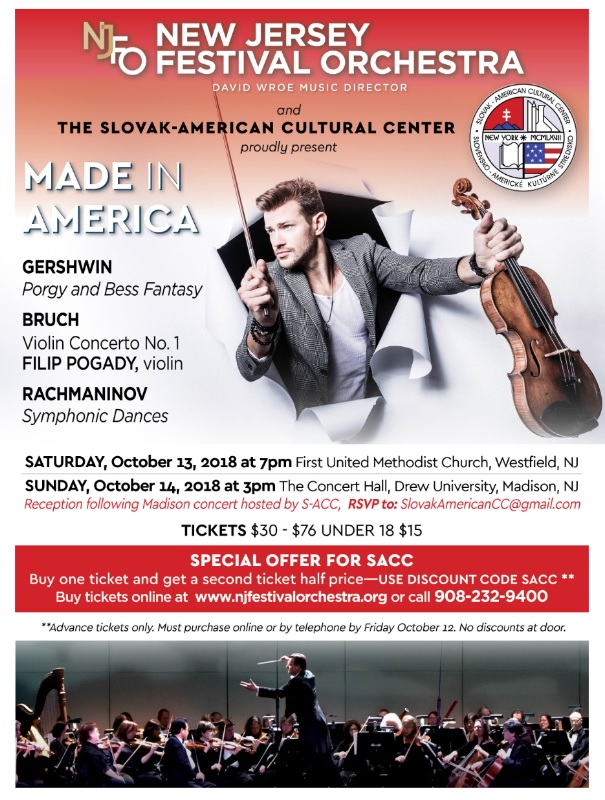 Pogady, hailed for his "lightning-like virtuosity" and beautiful tone, will solo the passionate Bruch Violin Concerto No. 1 with the prestigious New Jersey Festival Orchestra. Originally from Bratislava, Pogady now makes his home in New York City.

Please join us for a wine and cheese reception immediately following the Sunday, October 14th performance at Drew University at the historic Mead Hall, a former mansion located next to the Drew University concert hall.

Tickets may be purchased here on the NJFO website using the discount code: SACC.

Kindly RSVP to SlovakAmericanCC@gmail.org if you plan on attending the reception on October 14th to honor Filip Pogady and Maestro David Wroe, conductor of the NJFO.

We look forward to seeing you at this wonderful event brought to you in conjunction with the acclaimed New Jersey Festival Orchestra. Don't miss this chance to see Filip Pogady perform on a world-class stage!

Filip Pogády
born in Bratislava - Slovakia, Filip moved with his family to Austria as a child and began his violin studies at age 7. Just one year later he was admitted to the Bruckner Conservatory Pre-college in Linz. He gave his first recital at age 10.

Pogády has performed in some of the most renowned concert venues such as Lincoln Center New York, Rudolphinum Prague, Konzerthaus Vienna, Tel Aviv Opera House or the Lotte Hall in Seoul.
TV appearances include a guest starring on Louis CK's popular TV-show "Louie" where he acted as a subway violinist.

After being invited by Pinchas Zukerman personally to study with him, Filip Pogády followed his advice and earned his Master's Degree in Violin Performance at the Manhattan School of Music, where he was awarded a full scholarship.

As a firm believer that music should be available to everyone, Filip Pogády joined Yehudi Menuhin's “Live Music NOW!” Foundation, which is dedicated to bring music to orphanages, nursing homes, prisons and hospitals. Pogády has played over 30 recitals for “Live Music NOW”.

Pogády decided to take this concept to the next level and has been performing the Sonatas and Partitas by J.S.Bach in the New York City subway throughout his studies at the Manhattan School of Music until present.
“Most of these people have never heard this kind of music before, and yet it touches them on a basic human level, because this music is just SO good”, he says.

As a fashion model, Pogády has lent his face to high end labels like Calvin Klein and Saks 5th Ave.
He resides in New York City.